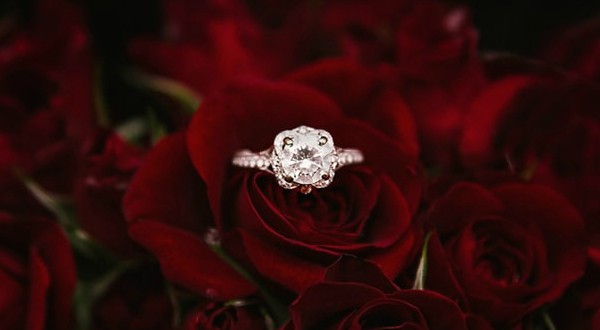 I had the kind of ring that made it hard to put my hand in my pocket. I always thought that was kind of obnoxious.

Sometimes my ring hurt to wear, like it was too heavy. His was a comfort fit, he didn’t have that problem.

My ring would reflect the light and blind you, like bling is suppose to do. I see now that it had other powers. It kept me bound; kept me locked down.

But his ring didn’t have the same effect on him? Somehow his gold comfort fit gave him permission to frolic, unbeknownst to me. His ring gave him exclusive access to some women. Maybe his ring was defective? His ring allowed him to make unilateral decisions that directly affected the unit. My ring had me speaking French, “Oui, we need to connect.”

My precious ring effectively kept the wolves at bay and reminded me of my dedication to our union. But I guess I should have heeded the signs. I would have to take it off sometimes — so I could breath.

Crystals transmit energy. I never set the intentions for my diamond. I never cleansed it in the moonlight.

It was an amazing thing, when I took off that ring. How free and liberating.

So to all the women who love shiny things. Be weary of the side effects that they may bring. The diamonds may be real, as well as the gold, but they hold powers untold.

Recognize the power of the diamond and make your intentions for the crystal clear. Cleanse it in running water and charge it in the moonlight. And charge and set intentions for his or her ring as well. Diamonds aren’t bad and can be a girl’s best friend, but only when you learn how to harness the power they hold within.

This post was previously published on [name of site] and is republished here with permission from the author.
—
Photo credit: unsplash.com

Reasons Why You Should Seriously Consider Dating an Older Woman

How I Overcame Being Touch Deprived to Become an Affectionate Person